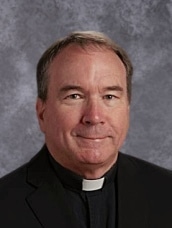 I have served as pastor of St. Mary of the Lake since July 2011 and was appointed as moderator of Frassati Catholic Academy by Archbishop Nienstedt in 2013. After my ordination in May 2004, I served as parochial vicar at the Cathedral of St. Paul for one year and pastor of St. Jude of the Lake (Mahtomedi) for six years.

I was born in Anoka, Minnesota, where my four brothers and one (very lucky!) sister still live. I attended St. Stephen Catholic School for grades 1 through 8 and graduated from Anoka Senior High School. I earned a degree in secondary education from St. Cloud State University and a law degree from Catholic University of America in Washington, D.C. I served as an Assistant State Attorney in Miami, Florida, for ten years, where I prosecuted a variety of criminal cases.